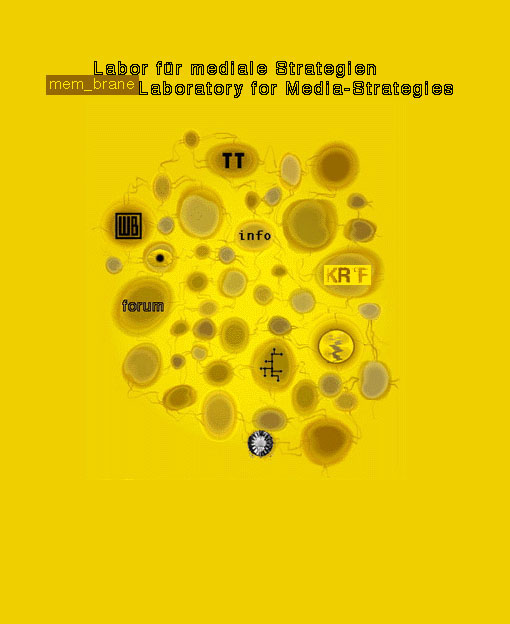 Mem_brane (1994 to 1996) was a laboratory for artistic oriented projects which concentrate on network and electronic information systems. The works that are realized focus upon unconventional development using the aesthetics of culture and technology, as a critical reflection of digital communication in and outside of data worlds. The enhanced growth of technological infrastructure in the present information society, must be evaluated across its daily applications, where questions are raised with relevance to media culture, economics and politics.

Membrane in collaboration with the Academy of Media Arts in Cologne, intends to grow into an interdisciplinary research location combining the talents of artists, technologists and theoreticians. Where the ability to realize effective models and projects concerning the interaction of virtual and real spaces takes place without direct pressure from the commercial world.

Mem_braneÕs motivation is the belief to design spaces and concepts that confront the field of mass culture’s ideals of information distribution and its generation:

1. The development of dynamic, self generating principles of communication.

2. The realization of multisensoric interfaces.

3. Perception of parallel realities in real space and data space.

Mem_brane is beginning as a small concentrated group, with three international projects and research themes.

1. Knowbotic Research (Germany/Austria) They focus on computer aided models of knowledge, design and perception. They have been awarded the German Media Art prize, ZKM Karlsruhe Ô95. Golden Nica for interactive art 93 Ars Electronica and have been invited to numerous events to present their work.

2. Stuart Rosenberg (Canada)- Is presently investigating concepts of a virtual economy. The project West Bank Industries has been created for its definition.

3. Stahl Stenslie (Norway)- has raised interest in the media with his cyber sex project in the field of tactile communications.

The above participants are connected by the common interest of commenting on critical and digital euphoria and at the same time developing strategies of keeping network channels open. Through their Internet server and various public events it is important that an exchange of ideas and interests in technology, theory and art, take place in a forum situated atmosphere.

Besides its Internet address, Mem_brane has a real address and office space in the Media Park, Cologne. This office is designed as a dynamic entrance/exit to computer and data networks.This shall grow as an International meeting point for on and off-line discourses in media art, theory and computer science.

Return to Other works