To read the description as PDF follow this link.

Published in Objects of Knowledge, of Art and of Friendship. Editors D. Link and N. Röller.
Institut für Buchkunst Leipzig 2011.

To the collection of strange experiments and experiences I would like to contribute one square millimeter of my skin. Despite its high number of nociceptors (pain receptors) (up to 4000 neurites/mm2) this little, organic donation is barely more than a lid to the wonders underneath. It is not in the skin alone, but in combination with the exposed flesh beneath the skin where the true potential of corporal sympathy is found. What if we were to connect the exposed muscles, nerve endings and flesh of one person to exactly the same spot on another person? And then what if poking a spot on the first person would then trigger the same sensation of the other? The couple would then sense the same sensation as if they were sharing one body. Such direct mapping of body and stimulations opens up for a direct, unfiltered, one-to-one exchange of bodily sensations and perceptions. My little square surface of skin is nothing but a manifestation of the possibility to communicate through the opening up of the body.

Phenomenologially speaking this presents a radical shift in the way we approach the combination of communication and technology. First proposed by Giambatista della Porta and later retold me by Siegfried, this creative concept has since both inspired and intrigued me. As to my knowledge such a corporal telegraph has neither been built, nor has anyone ever attempted to construct it. To this day this device remains an imaginary device, perhaps rendered impossible due to the corporal sacrifice it demands of the two users. To construct, cipher and decipher the corpus of communication must necessarily involve a certain measure of pain. This possibly adds extra complexity to the system, but it could also function reductively. Perhaps the significance of the messages exchanged will be no more intelligible than the sensation felt. Feelings become both the in-, output and the content.  Della Porta did propose to place circles of letters around the wound. By exciting the wound next to the letter one would ‘type’ the message onto the exactly same spot on the other person. Due to the amount of pain involved there is a fair possibility that perhaps no worldly communication can be coded and decoded through this method. Then again, what is content? How can I really understand something if it does not relate to me? This physical telegraph grants us direct access to communication as corpus. Another intriguing dimension is that this method of communication demands sacrifices. There is no communication without setting up one, shared body. This particular social dimension of the communication can only come about if one literally opens up oneself. Communication therefore comes with a cost not anyone can or will pay. Messages can here not be twittered around as cheap, fleating ideas. They suddenly become valuable, costly and perhaps even precious. The opening up of the skin becomes a private key to understanding the deepest of messages, the most intimate and dearly intent and content that can never be shared through ‘social’ media like Facebook or Twitter. The message remains hidden in the tenderness of a tormented body. For some possibly even in the pleasure of sharing the itching stimulation of a bleeding wound.

Today, in the technoindustries’ fight to create the next web – whether ‘3.0’ or the similar- della Porta’s visions still pose possibilities opening up for new modes of communication. Still we are bound by the industries’ idea of screen and keyboard as our interface to the world. Going private and personal by penetrating the skin, della Porta involves the idea of sharing skin too. His vision is therefore an interskin of communication. This facilitates direct communication, values intimacy and reintroduces the idea of sympathy into communication. Technologically Della Porta’s system worked through sympathetic action based on ‘natural magic. Today it can possibly be realized with a range of telecommunicative, wireless technologies. The bloodied knifes he suggested using to pricking the wound can be replaced by minituarized tactors placed under the skin, hygienically and probably safe.

Merleau-Ponty calls the sharing of a body for intercorporality. The emotional co-respondence between della Porta’s users enables the communication of emotions, questions and answers without words. Such intercorporal existencechallenge how we form and build relations and networks. It enables new forms of content that we have little or no experience with. Realizing this proposal will answer many questions. Is the mutually experienced reality due to evolutionary adaption, cultural development or techno-magic insight? Which new identities evolve as we share the same body?

The true challenge remains. My one square millimeter of skin is only half a contribution. To complete this experiment I propose to expose the same square millimeter of flesh on Siegfrieds corpus and connecting our two wounds in the most sympathetic way possible. Thereby giving us first hand access to a corporal verification of how the bodygraph of della Porta really function. In any case it promises to give us an insight into symphatic communication. Even in times when it appears cryptic.

To read the  description as PDF follow this link. 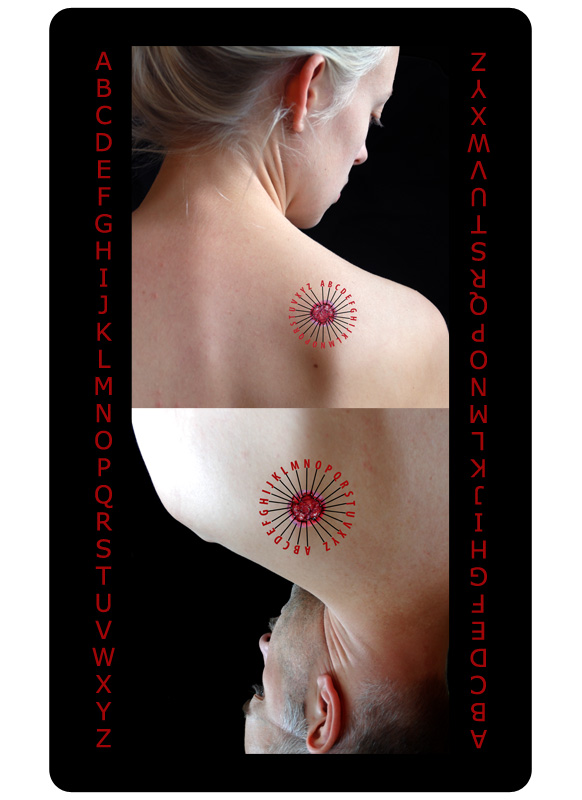 Return to Other works