Mothers of The Nation is a collaborative project by Barbar Stahl

The paintings are post-mortem portraits of the Norwegian Prime Minister Erna Solberg along with its closest allies Minister of Finance Siv Jensen and Minister of Defence Ine Eriksen Søreide (as of 2015). The images are martyr portraits, painted in classic European technique and style. Design and positioning is inspired by images of martyrs as found in some contemporary Muslim contexts. The images can be perceived and interpreted on several levels. There is no one correct reading of the paintings. If we read Siv, Erna and Ine as vulnerable individuals, then the images can be perceived as cruel. If we however consider them as what they actually are: the most powerful women in Norway, so they appear to be our nation’s strongest symbols. These three women are to our Nation what the mountains, the fjords and romance was to the Norwegian national painters Tidemand and Gude. Therefore the pictures are contemporary portraits of the nation. They are like ‘Brudeferden i Hardanger’: stately, magnificent -and fictitious- images of Norway. If we exchange our cultural optics and observe them the through the Muslim eye, then they an also be interpreted as heroes. They are the heroes of the nation. The many contemporary death portraits of martyrs can be read as respectful portrayals of noble and righteous actions. The paintings can therefore be seen as renditions of honourable acts. Martyr motives of the Dead can be perceived by many as terrifying, but for others as inspiring and motivating? Erna, Siv and Ine are strong personaes who believe in Norway and are willing to give everything for the Nations. The ultimate sacrifice is a part of their roles and the social mandate they have taken upon themselves. They are our living heroes. They are the ones who daily influence, shape and foster us. Even in death. Or? The fact that possible interpretations of the images quickly shift from Pro- to contra makes the paintings ambiguous. They inflict afterthoughts about difficult subjects, culturally as well as religiously and politically. The pictures are classic Memento Mori (remember death) motifs. They can be understood both as a warning and as a call to arms. Images of martyrs are made to incite us. Erna, Siv and Ine are archetypal in their portraits. They are our Mothers of the Nation. Dead or alive. 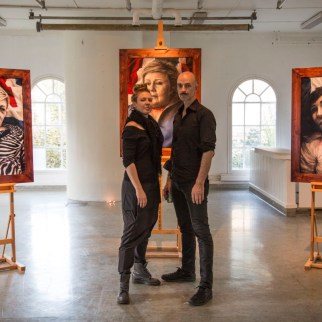 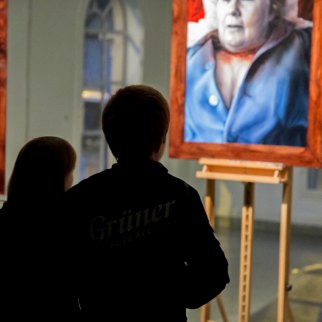