’Nothing else than organized non-violence can meet organized violence’,
– Ghandi in a letter to Lord Erwin, March 2nd 1930

The project is fundamentally humanistic and oriented towards the dignity and worth of all people: it enters impossible and unsolvable human conflicts with the purpose to develop alternative solutions. Where logic, reason and intellect do not work other methods must be developed. The project therefore makes use of inverse strategy and inverse technology. This turns current value-, norm systems and common thinking patterns on the head with the intention of revealing why previous and well-intended solutions did not work. This technique is excessive, exaggerated and absurd to expose the extreme polarizing elements of extreme situations. Such an approach is not without irony, but the project is about determined and seriously implementation of architecture as a positive way to counter violence and destruction.

Inspired by Ghandis strategy of passive resistance, how can this be translated into architecture? By inverting our accustomed thinking about war, buildings and functionality. Buildings are usually made to last forever, now we conceptualize and design structures made to be bombed. The project is planning and preparing for the dismantling and destruction we know will reoccur in the cursed areas of conflict and war. No matter how often such buildings will be bombed and destroyed, they can always be rebuilt. This inversion of architecture makes destruction pointless; the buildings become preemptive. Such inverse thinking is a tool to make reconstruction easier, but also to produce a new and deeper meaning. Constructing buildings can both be a physical and a mental process. War and destruction can so be seen as a creative situation, both for thinking and as a material. Practically the project asks how to construct bombable buildings, mentally it asks how reconstruction can contribute to strengthen identity and sense of place.

The project has a dimension of psycho-physical sculpture in itself, ie objects and structures that are both physical and that affects our everyday life, mentally and socially.

It is a goal to construct an actual and practical bomb-able structure. Bombing implemented for example with the Norwegian military. The structures proposed by the project need not to be material. They can also take form as a virtual plan – for example, proposing town planning that redirects our orientation according to historical bomb impacts.
The establishment of bomb-able sculpture will also serve as a monument and symbol of peace and peace solutions. If Gaza is reconstructed with this type of structures the area could be read as a single peace monument. 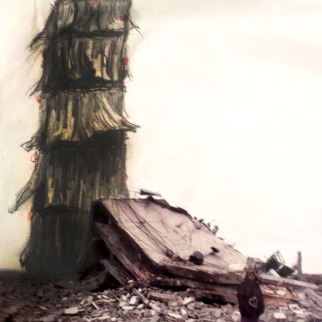 Sketch for an imploadable tower @ Gaza. 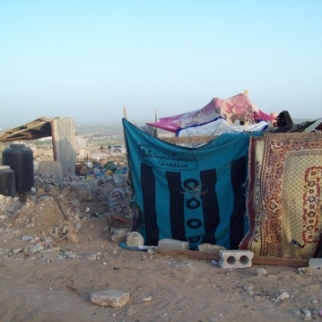 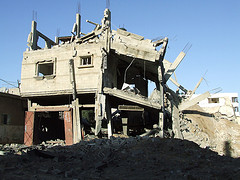